I never thought Kanye West would pull off five albums in five weeks, but his label G.O.O.D. Music, with Pusha T as President, delivered all throughout June 2018. Below, you’ll find my thoughts about each record, and if releasing the next project so soon after the other was a good move. 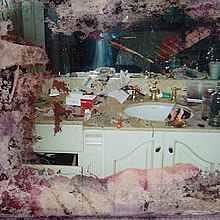 Kanye is nothing if not ambitious, and right off the bat on “If You Know You Know,” he proved that despite all of the crazy political ideology and Twitter rants to escape his mouth, he still could produce the hell out of a song. Not just a song, mind you, but a whole album. Pusha T may sound a bit out of his depth on a couple beats, as if he had one gear and couldn’t match all of Kanye’s different styles, but it’s one of the most memorable Pusha records in awhile. Shame it all got caught up in a feud with Drake over one tiny line, but I think it’s safe to say that Drake finally lost a rap beef.

My favorite of the five releases, Kids See Ghosts wasn’t just the true return for The Man on the Moon era Kid Cudi, but also a semi-spiritual Kanye, who performs where better here than on ye. Kids See Ghosts sounds like the anniversary project of 808’s & Heartbreak meets Yeezus meets Man on the Moon, and it showcases a Kanye and Cudi team up that has always delivered. Mainly a record built for Cudi, he truly does sound reborn after starting a massive conversation in hip-hop about mental health, and maybe now, Kanye West as well.

Just a couple of days before the release of NASIR, Nas’ ex-wife Kelis, the subject of Nas’ previous record Life Is Good from 2012, spoke out about how he would get obscenely drunk and abused her for years while they were married. It struck a chord with me, as Nas not only made one of the most famous hi-hop records of all time when he was eighteen, but made us all think he was the victim on Life Is Good; an album with one of Kelis’ dresses draped over a somber Nas’ leg.

It is without mentioning that the accusations against Nas do not come up in his verses even once, but released fourth in a quick stream of heavy rap releases and the same week as Jay Rock’s Redemption and Beyoncé & Jay-Z’s Everything Is Love, NASIR got quietly swept under the rug like A$AP Rocky’s Testing (all records I hope to speak on soon). Quite rightfully so however, as I didn’t see anything stick out from the record besides “Cops Shot the Kid,” and I have to give about 80% of that to Kanye’s production. Bluntly stated, I don’t know what place Nas has in hip-hop anymore.

Even with the insane amount of rap to digest in this G.O.O.D. Music June quick-release, Teyana Taylor’s record is probably my second favorite on the list, right under Kids See Ghost. It has its oddities, such as whatever “3Way” is supposed to be and a weird Kanye verse on “Hurry,” but it’s probably the most cohesive project released. The production on tracks like “Gonna Love Me” and “Rose in Harlem” are some of Kanye’s latest best, and besides dancing the hell out of the “Fade” video, Taylor can really sing. I don’t need all of those “Issues” laser sounds, but I definitely need some more Teyana Taylor; probably the best talent over at G.O.O.D., as most women are, sadly, usually under-appreciated by their labels.

Ultimately, June has felt like a year long, and I think the quick push and limited time between releases might throw some of these projects to the way side. Nas’ record will probably be forgotten (Pusha’s too if not for the Drake beef), and Teyana Taylor’s could sadly be slept on, but it’s the newest of the bunch and we have yet to see. ye might go down as Kanye West’s worst release of his career so far, depending on how much his political alliances and shelf life of Yeezus and Life of Pablo factor in, but Kids See Ghosts will probably be the most influential for the future in terms of sound.

I will say that I very much appreciated seven-track records over the recent trend of 21-track length records to capitalize on streams, but I do think there’s a happy medium. While 18-21 track records are too long, and seven-track records have me wishing for more, maybe an 8-10 track sized record is really the perfect sweet spot. Then again, making the records seven-tracks, an often under a half-hour, made for excellent playback quality, so at the very least, it seems quality over quantity still wins the day.

For my in-depth review of Kanye’s latest antics and his solo record ye, check out my piece, “Fallen Son – The Death of Kanye West.”

To hear a compilation record of all of Roseandblog’s favorite tracks from the five G.O.O.D. Music Summer 2018 projects, head over to the playlist on Apple Music here.

What do you think? Drop your thoughts in the comments below.

How Cool Is This Site?